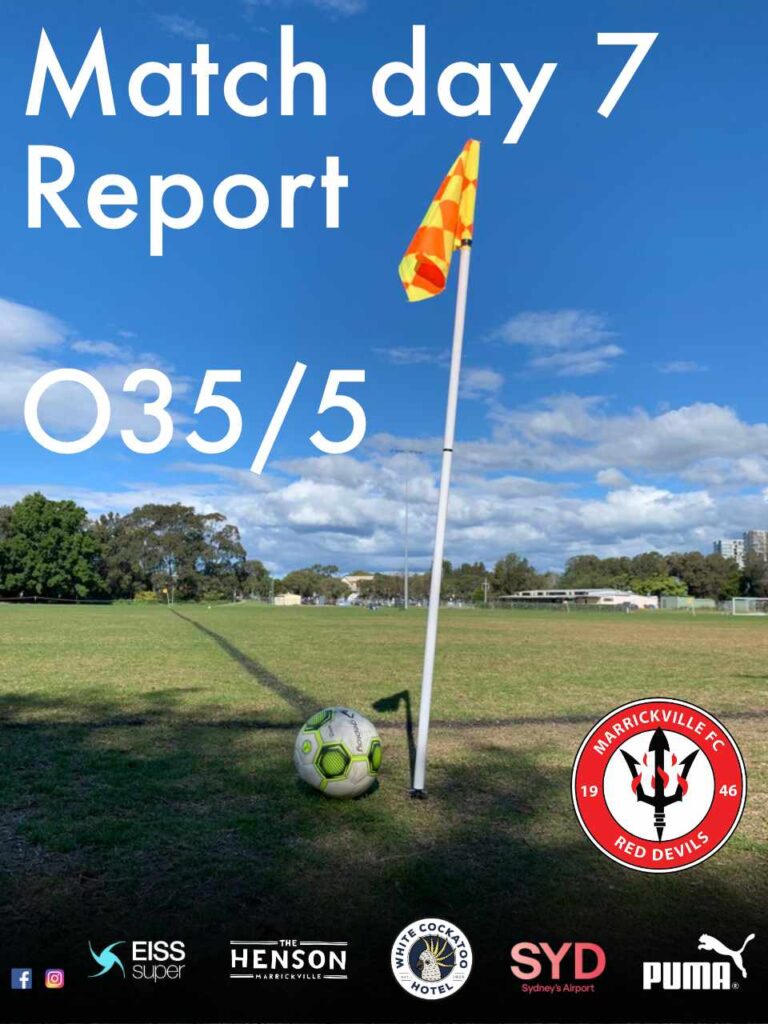 The phantoms came to be in 1994 in the premiere league for the Red Devils. The team were made up of the rejects that didn’t make the first and reserve squads. For many, being left out of teams that included your best friends was tough, but it started a tradition founded on resilience and determination. From winning a single game in its first year the phantoms have gone on to feature in semi-finals and grand finals. Playing some of the most memorable grand finals ever played in the history of our great club.

On Saturday the undefeated phantoms faced the more experienced and fancied also undefeated Earlwood over 35/5s in a top of the table clash.

Earlwood are well known to us and are infamous for their strong well-trained teams, with this team being no exception, they certainly played like a team that should be playing several divisions above division 5, but they were coming up against Marrickville FC and the mighty Phantoms.

The game played out as expected, high tempo and energy. The phantoms faced their toughest challenge, given the ladder this game was equal to a major semi-final. A loss would potentially end the season.

Earlwood displayed great skills on the ball and teamwork, with a tight first half which saw the phantoms chase a 1 nil lead to Earlwood after a free kick given away by as a result of an accidental handball by the phantoms. Earlwood snuck the ball under the defensive wall and wide of the Phantoms goalkeeper Adrian.

It didn’t take long for the Phantoms to equalise, after Earlwood player was sent off, the momentum swung the Phantoms way. In a passage of play in which the Phantoms regained possession in the attacking third of the field, a ball was played to Zozimo Dos Santos at the top of the box with a quick movement to the left edge of the penalty box, with no pressure and time to look up, Zozimo Dos Santos crosses the ball to the unmarked Marrickville FC life member and team captain Pierre Millet at the top of the far right 5 yard box for him to head the ball across the goalmouth away from the out stretched arms of the Earlwood goalkeeper.

Not long after Earlwood conceded a free kick, which would prove to be to Earlwood’s determent. Up stepped the ever-reliable David who crossed the ball into the box, and after a loose scramble, Zozimo Dos Santos pocked the ball past the keeper into the back of the net. This would leave Earlwood stunned and the Phantoms would take this lead 2-1 to the half time break.

During the start of the second half, both teams come out searching for a goal. The pace of the game took a toll on both sides as the Phantoms pressed in attack, Earlwood counterattacks pushing a long ball down the middle to the top of the attacking third, splitting our defence and just wide of Jas, and straight in the path of the Earlwood striker who calmly slots the ball past our advancing Goalkeeper Adrian who comes off his line to intercept the ball. This levels the scores 2-2.

The game continues, with both teams pressing, and looking for any advantage to score. Earlwood would get a small opportunity and again Earlwood scores which gives them the lead, the phantoms are down 3-2. It would have been easy to drop our heads and accept defeat, but for those who know the DNA of this team, giving up is not an option.

The team rallied and attacked at every opportunity, Earlwood were tiring and finally after a piece of David Ozacardi magic, he was denied a magnificent goal after taking a shot from outside the box to beat the Earlwood goalkeeper on the goal line, only to be denied by an Earlwood player standing right behind the goalkeeper, who channelled his Luis Suarez, and palms the ball away to not concede a goal. The referee had no option other than to issue a red card for handball and award the Phantoms a penalty.

At this moment team captain Pierre Millet positions the ball at the penalty spot, he takes his time to consider the conditions, takes his first step and races to the ball to calmy slots the ball to the right and fool the goalkeeper who goes to the left, goal and the Phantoms equalise 3-3.

That’s how it ended, a tough contest fought by two formidable teams. Earlwood as expected were our toughest opposition and the scene is set for a nail biting and high pressure set of games to come – one loss to either team could spell the end of the season.

The Phantoms with 10 new players for the season showed grit determination and courage whilst being ambassadors for our great club even in the face of adversity.  The next meeting with Earlwood will be a sell out!